(CNN)Hand hygiene is an important way to prevent the spread of Covid-19 and, when soap and water isn’t available, alcohol-based hand sanitizer is the next best way to do this. Dispensers of hand sanitizer have popped up in malls, schools, workplaces and on public transportation to make it easier for people to disinfect their hands. However,one consequence, documentedin France, has been chemical injuries in children who have accidentally gotten sanitizer in their eyes.

There were seven times more cases among children of eye exposure to hazardous chemicals inhand sanitizer between April 1 and August 24, 2020, compared with the same period a year earlier, according to data from the French Poison Control Center. Similarly, in the same period, 16 children were admitted to a pediatric ophthalmology hospital in Paris because their eyes were spattered with hand sanitizer compared with only one boy in 2019. Two severe cases required surgery to transplant tissue into their corneas.

The hospital cases were all in children under the age of 4, and the French researchers said the reason for this was likely because gel dispensers are usually at 1 meter (3 feet) in height. While this is waist level for most adults, it’s eye level for young children. “With the current widespread use of hand sanitizer in public places, it is not unexpected that young children would be drawn to these dispensers, many of which appear to be inadvertently designed to facilitate contact between the hand sanitizer and young eyes,” said Dr. Kathryn Colby from the Grossman School of Medicine’s department of ophthalmology at New York University in a commentary that accompanied the research. The study was published in the journal JAMA Opthamology on Thursday.Hand sanitizer accounted for just 1.3% of all chemical eye exposure incidents in children in 2019, according to the French database. That number was 9.9% in 2020, and it said that most cases were mild.

The biggest risk to kids, the research also suggested, could come from dispensers installed in public places. In 2020, 63 cases of exposure occurred in a public place, while none was reported in 2019.Many hand sanitizers have a high concentration of ethanol, which can kill cells in the cornea.In a related study published in the same journal, physicians in India detailed the cases of two children that accidentally squirted hand sanitizer in the eye, with serious consequences. The 4-year-old complained that she couldn’t stand to look at light, while the 5-year-old had damage to his eyelid. Both children made full recoveries after treatment with saline washes and eye drops, but their doctors said it’s necessary to consider the potential hazards of hand sanitizers in public places and schools. The doctors recommended the following steps:

Colby said that parents also need to make sure their child’s eyes are quickly examined by a medical professionals if they are exposed to alcohol sanitizer, with early diagnosis and treatment likely to reduce the long-term consequences of chemical injuries to the eyes.

“In an emergency, any clean liquid can be used to irrigate the eye following chemical exposure, and wording to this effect can be considered as part of a warning sign,” she said. 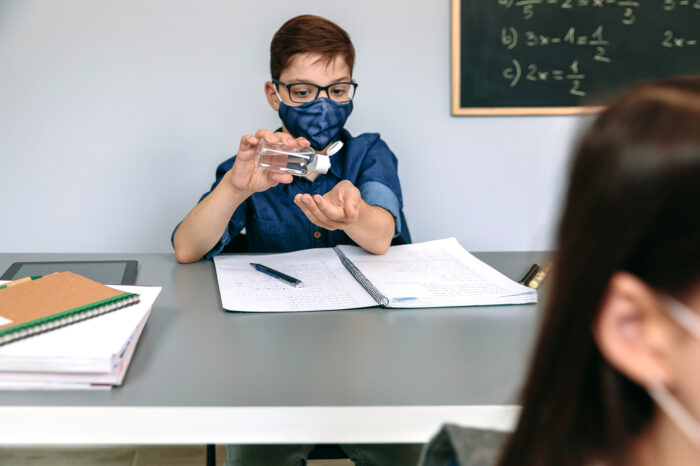