Mom with ALS: My disease will make my daughter stronger 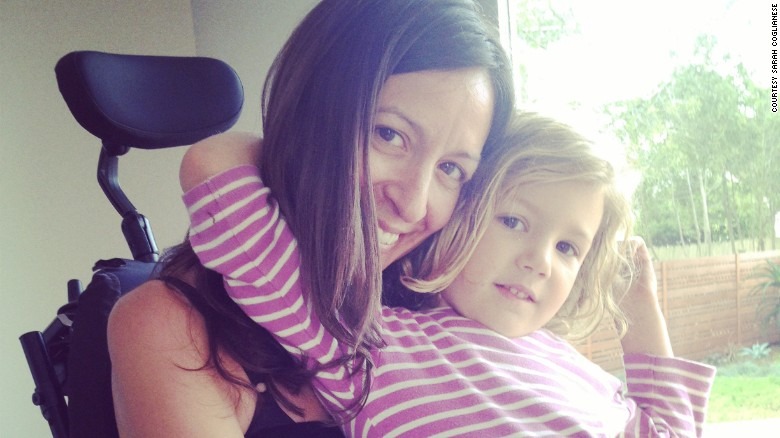 My daughter was an energetic and fearless kid who our doctor had declared would be walking before her first birthday. It came and went, and Scarlett still wasn’t toddling on two feet. To balance any concern, I would say things like, “It’s not like she’s going to be crawling into junior high.”

Sure enough, one spring day when she was 15 months, she popped up in the backyard and marched across the grass to a host of cheers and shrieks, mainly coming from me.

A month later, I began to fall for no apparent reason. Crossing a busy street in boots one evening, I found myself on the ground six times. In flip-flops, I fell up and down stairs as though I was practicing for clown school. While my daughter’s walking improved each week, mine, it seemed, was on an opposite trajectory.

I tried running, my favorite activity. I never got far before it became clear that my feet would not be participating. When I forced it, I would hit the cement so hard and uncontrollably that I had the skinned knees of a kid just learning how to move in her body.

For months, medical professionals insisted there was nothing wrong with me. When I finally consulted a podiatrist, he told me that the problem was not in my feet, but in my back. “You need to see a neurologist,” he advised, and I stepped carefully out of his office, convinced that I had a pinched nerve and that in no time, I would be running around with my little girl.

I could never have guessed that a rare — and fatal — neurological disease was to blame.

After no more than 20 minutes in my presence, the neurologist at University of California San Francisco decided that it was very likely that I had ALS. It was 2012. I was 33 years old. My daughter was almost 2. My husband and I had been trying for baby No. 2, but the neurologist curtly suggested that we stop. Something was seriously wrong with me.

It was a baffling appointment. I was so glad that someone was finally taking me seriously, but I hated everything that he was saying. Even though nothing was definitive at that point, it felt like a worst case scenario, especially after I went home and Googled ALS.

Amyotrophic Lateral Sclerosis is a neurodegenerative disease that destroys motor neurons. Uniformly fatal, and with no known cause or cure, it paralyzes its victims, ending their lives in an average of two to five years after diagnosis. It’s a horror story, a nightmare I could not have envisioned even in my darkest creative moment.

My husband and I were in a serious state of shock when I received my official diagnosis six months later. We wished for anything but ALS, and I underwent invasive treatments for Lyme Disease, gave up gluten and stuffed myself with vitamins and supplements.

But the opinion was seconded at the Mayo Clinic in Rochester, Minnesota, where they ran the same electromyography and nerve conduction tests. A stoic white-haired doctor administered increasingly intense electric shocks to my limbs over and over, then poked needles into my muscles and jiggled them around. I endured these now familiar ordeals, wishing that Mayo would have allowed my husband into the room with me to hold my hand or distract me with stories.

Instead, I had only this doctor, who wasn’t permitted to share his observations with me. When he had finished the tests, he walked toward the door, turning slightly as he reached it, and said, “Good luck.”

“I think so,” he said sadly, and left me alone.

Both clinics told me that I had several crucial factors working for me. I was young and otherwise healthy. The disease started in my feet, as far away from my breathing and swallowing muscles as it could get. And finally, a piece of truly good news: my ALS was “sporadic,” not genetic. I would not be passing it on to Scarlett. I was reassured by these statements, and held on to their vague promises like a child white-knuckling a bunch of balloons against a strong wind.

The mom I am now

When Scarlett was a little baby, I used to dance with her in the kitchen, swinging her tiny body around while she laughed. I would rock her in the night, pacing our narrow hallway, when she struggled to sleep. We spent my maternity leave taking long walks, Scarlett snuggled against my chest in a baby carrier while I whispered songs and stories into her ear.

Now she’s 5. ALS has completely changed the person I thought I was going to be, the mom I thought I was going to be. I’m in a wheelchair, my arms and hands are so weak I need help to eat and a machine breathes for me at night. I wasn’t the one to teach my daughter to kick a soccer ball. I can’t bake with her or do art projects. I can’t write letters for her to trace or rub her back while she falls asleep.

At first, I was drowning in all my inability, in all the ways I thought I would fail her as a mom. Then something unexpected started to happen. The things I couldn’t do for her, she started to do for herself. When she was 2, she dressed herself. By age 3, she was opening doors for me and helping with groceries. At 4, she could make a quiche, and these days she folds laundry and cleans her room with only the slightest bit of prodding. Sometimes, she gets a broom and a dustpan and starts sweeping the floor without being asked. If my foot slips off my footrest, she nonchalantly walks over and plops it back in place.

Scarlett has to understand that I am not her all-powerful mom, and while this is hard for me, it also means that she notices and is aware of my needs in a way that I never expected. I was planning to be around for a long time to take care of her. But this is our reality, and I’m proud and impressed by everything she is doing to take care of me.

Of course, she’s still a young kid, testing boundaries, devolving into potty talk and finding new and interesting ways to torment (er, aggressively love) the dog. Sometimes we encounter obstacles that fall outside either of our current skill sets. This fall’s kindergarten transition, for instance, included the realization that Scarlett’s school requires lace-up shoes. She can’t tie them, and I can’t tie them anymore. She’ll learn. But in the meantime, it’s a frustrating experience to not be able to help her with this simple task.

It’s as if we are on two parallel paths, my daughter and I, except she’s traveling up hers while mine is as slippery as a chute. Sometimes I just watch her, remembering the baby she was, marveling at the strong and coordinated child she’s become. She runs around on muscular legs, stands on tiptoes to reach high shelves and whips a Frisbee across the yard. Her abilities amaze me. She — at 5 years old — is far more self-sufficient than I am.

And from where I sit, I can see the type of person she is: fierce and brave and loving, empathetic beyond her years. I know that these qualities will only continue to grow as she gets older, that in some ways, she will be an even stronger person because of my disease. This is a promise I hold close, one that will not slip away. 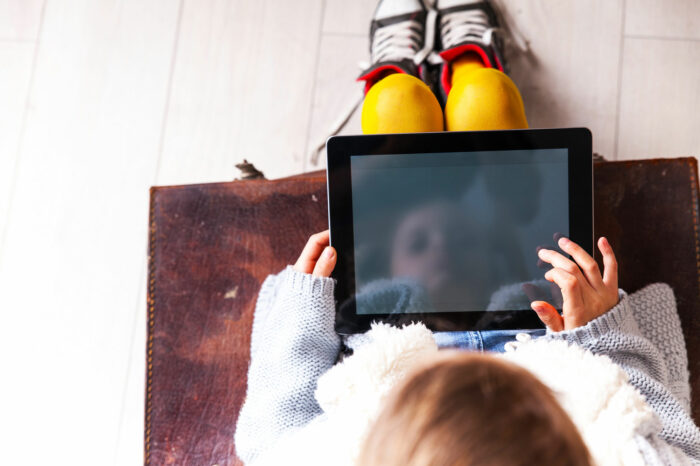 Hey parents, children and iPads are a bad mix