People are getting shot by toddlers on a weekly basis 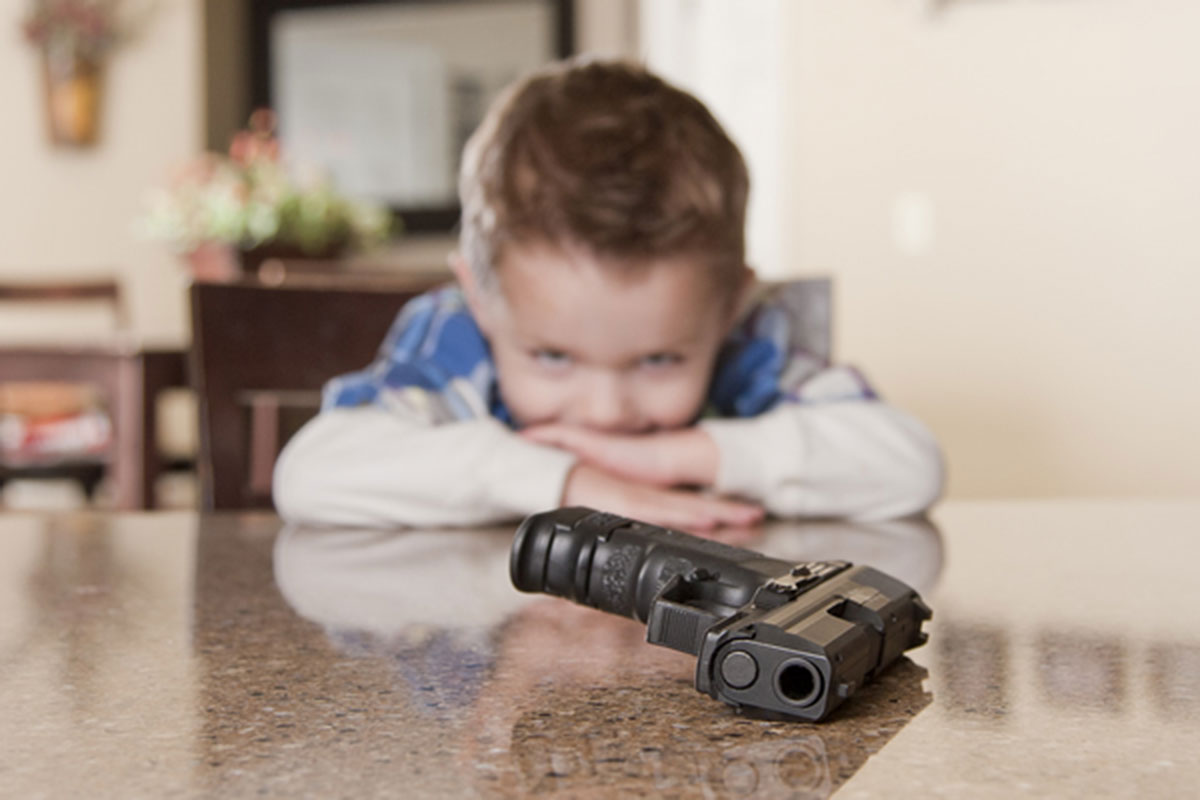 This week a 2-year-old in South Carolina found a gun in the back seat of the car he was riding in and accidentally shot his grandmother, who was sitting in the passenger seat. This type of thing happens from time to time: a little kid finds a gun, fires it, and hurts or kills himself or someone else. These cases rarely bubble up to the national level except when someone, like a parent, ends up dead.

But cases like this happen a lot more frequently than you might think. After spending a few hours sifting through news reports, I’ve found at least 43 instances this year of somebody being shot by a toddler 3 or younger. In 31 of those 43 cases, a toddler found a gun and shot himself or herself. 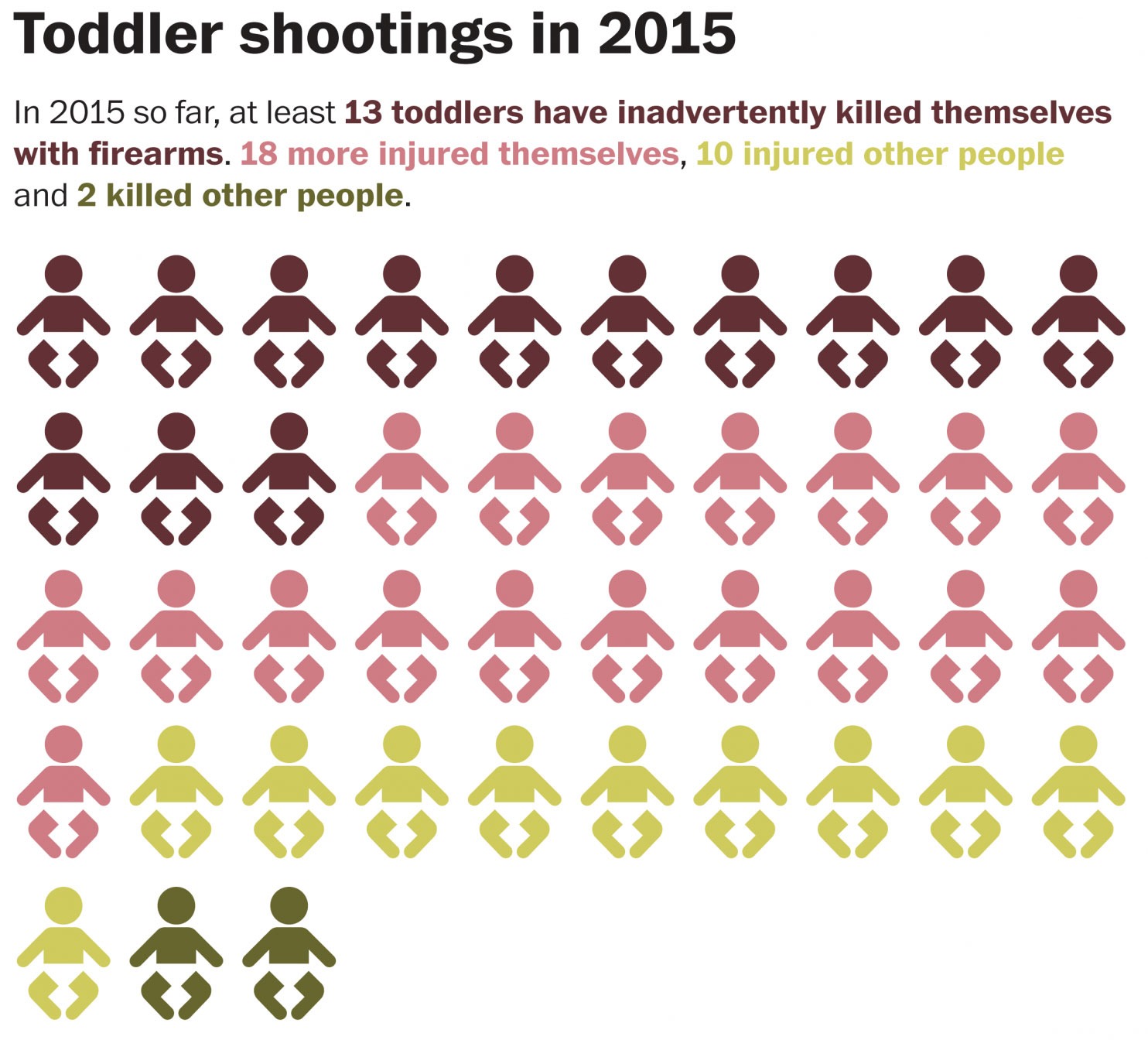 In August, for instance, a 21-month-old in the St. Louis area found a loaded handgun at his grandmother’s house and shot himself in the torso. His mother took him to a local hospital, where he was pronounced dead. Earlier in the year a Michigan 3-year-old found a loaded .40-caliber handgun in a closet while his dad and brother were outside. He shot himself in the head and died before rescue workers arrived.

The stories go on and on like this: Roughly once a week this year, on average, a small child has found a gun, pointed it at himself or someone else, and pulled the trigger. Boys are disproportionately likely to do this: I could find only three cases where a girl under the age of 4 wounded someone with a gun. In 13 of the 43 total incidents, a child’s self-inflicted injuries were fatal. In two other cases, another person died after being shot by a toddler: a father in Alabama, and a 1-year-old in Ohio.

In one instance, a 3-year-old managed to wound both of his parents with a single gunshot at an Albuquerque motel.

Shootings by toddlers have happened in 24 states so far this year. Missouri has seen the most, with five separate incidents. Florida has had four. Texas, three. Due to the low number of total cases and the isolated nature of these incidents I’d caution against drawing broad conclusions from the map above. But it is worth noting that the shootings don’t necessarily follow broader population trends. California, the most populous state in the nation, hasn’t had any. Nobody has been shot by a toddler in New England or the Upper Midwest. 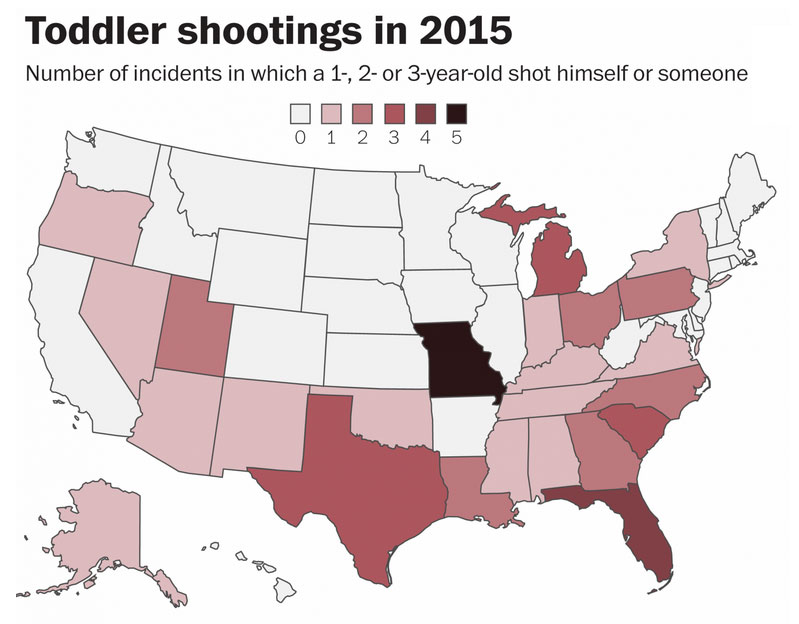 These numbers are probably an undercount. There are likely instances of toddlers shooting people that result in minor injuries and no media coverage. And there are probably many more cases where a little kid inadvertently shoots a gun and doesn’t hit anyone, resulting in little more than a scared kid and (hopefully) chastened parents.

Notably, these numbers don’t include cases where toddlers are shot, intentionally or otherwise, by older children or adults. Dozens of preschoolers are killed in acts of homicide each year, according to the Centers for Disease Control and Prevention. But I haven’t included those figures here.

These cases are invariably referred to as “accidents” in media reports. But as Everytown for Gun Safety, a group that advocates for stricter gun laws, argues, many incidents like this are preventable. In a study of accidental shootings by children of all ages (not just toddlers), they estimate that “more than two-thirds of these tragedies could be avoided if gun owners stored their guns responsibly and prevented children from accessing them.”

There are policy and technical responses to preventable childhood gun deaths as well. States and localities could require guns to be locked up at home, a policy supported by 67 percent of Americans. Various types of smart gun technology, which prevent anyone other than their owners from firing a given gun, exist as well. But gun lock requirements and smart guns have been vehemently opposed by the National Rifle Association and its allies.

Instead, the NRA continues to promote a response that seeks to solve gun problems with more guns, and aims to broaden the saturation of firearms in nearly every sphere of public and private life, from homes to schools to churches to bars to airports and beyond. In a country with more guns than people, it’s only natural that a certain number of small children are going get their hands on an unsecured firearm, with tragic consequences.
Depending on where you stand on gun policy, you may feel that 13 dead toddlers in 10 months is too many. Or, you might reason that stuff happens, and that this is part of the price we must pay to protect our gun rights. 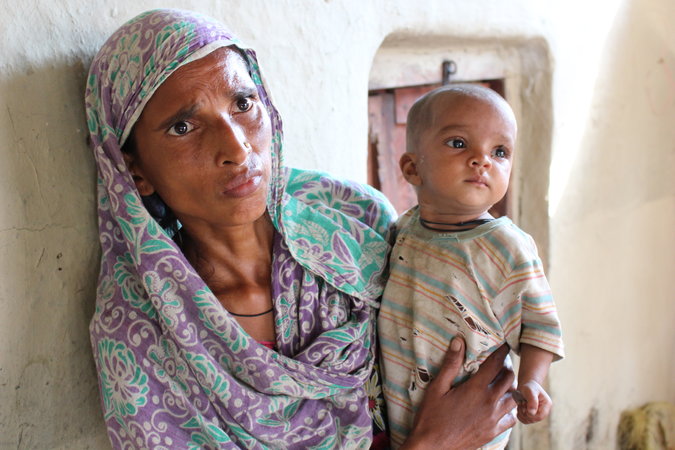 Half the Kids in This Part of India Are Stunted